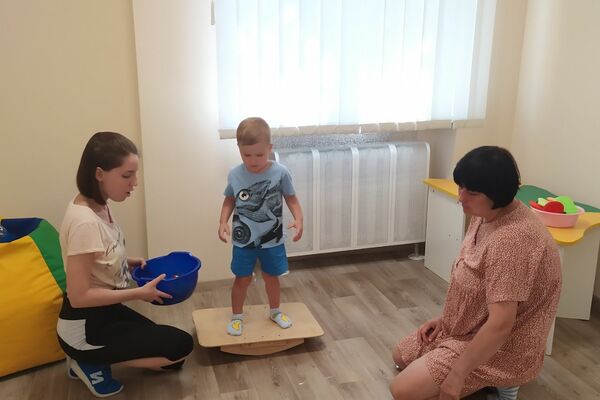 Stories from parents-led organisations in Ukraine

The parent organisations supported by HealthProm and our partners to advocate for Early Intervention in 2016-2019 continue to have strategic impact.    Three of these organisations, two in the Donbass regions of Luhansk and Donetsk - those most affected by the conflict with Russia - and one in Kharkiv city, give us a glimpse of their efforts.

The parent organisation Shiroko Kolo was formed in 2019, by two parent leaders employed to deliver HealthProm’s initiative, and other parents supported by our partner, the Kharkiv Early Intervention Institute.  Vita Pirogova and Natalia Sergiyenko, Regional Representative Kharkiv AUPFEI are looking forward to a new stage in their efforts:

“We are implementing a project to boost the number of inclusive educational services for school and preschool-age children with special educational needs (SEN) in Kharkiv, with the support of Open Society Foundations. It forms part of our advocacy efforts to create an inclusive environment for children with SEN and disabilities.

The project will draw on focus groups, questionnaires and life stories to analyse and show "How families with children with SEN live, and the difficulties they overcome", and the advantages and disadvantages of the various routes that families have taken. We plan to develop a roadmap of educational pathways for children with SEN in Kharkiv Oblast.

A series of educational activities on the challenges of inclusion (including Early Intervention) will be developed for a pilot focus group of parents, working together with teachers. The results of this trial will allow for the development of materials and recommendations for a wider group of parents.

There will be a discussion of how to find ways in which parent organisations can help create an inclusive educational environment in society and bring active parents together. There will also be an awareness and education campaign on the importance and content of inclusive education for parents of children with SEN. Parents and inclusion specialists in other regions in Ukraine will share experiences and best practice.

One of the results of the project will be the formation of a local expert parent community in Kharkiv, bringing together the most active and conscientious parents, to introduce and monitor inclusive education in the city. To share experiences, parents from Dnipro will be invited, and a trip to Lviv is planned.

This project will help us move towards our long-term goals: the creation of a day care centre and social service for children with multiple forms of disabilities in Kharkiv city; development and support for inclusive education in preschool and school settings; and the development of systemic Early Intervention throughout the city.”

During the three-year funded initiative, an informal group of parents in Luhansk region came together to form the Luhansk branch of the All-Ukrainian Parents Forum for Early Intervention (AUPFEI), and to campaign vigorously for an EI service. A breakthrough came at the end of last year, several months after HealthProm’s funded initiative had finished. The authorities in the capital city of Luhansk, Severodonetsk, decided to allocate funding from the city budget to support a five-person multi-disciplinary professional Early Intervention (EI) team, which had previously been operating on a part-time, voluntary basis, to deliver a comprehensive full-time EI service to families in Severodonetsk.

This team had emerged in 2017, when the Kharkiv Early Intervention Institute, with support from UNICEF, had trained professional teams to deliver an EI service in five towns in the region. Four teams had been very keen to establish services. In addition to the full-time Severodonetsk service, a further team in Rubyozhny has found support to provide a service, but at this point the teams trained to deliver EI in Kremennaya and Lisichansk only operate on a voluntary and very part-time basis.

“The Luhansk branch of AUPFEI has continued to support these early-stage services. Earlier this year the National Assembly of People with Disabilities of Ukraine (NADU) entrusted funding to the parents to support EI in their region. The Luhansk AUPFEI regional representative and her team held talks in March with the directors of the community rehabilitation centres that have been providing EI services, before making any decisions on how to use the funding.

During these talks, they discussed issues related to the quality of the delivery of EI services and evaluated methods used by each specific branch to improve public awareness of the service. "Problem areas" in the provision of EI were also discussed and the best solutions proposed, as were strategies for cooperation between specialists and parents for the near future.

As a result, the Luhansk parents decided to support the EI teams with information materials and the equipment they needed to deliver an effective EI service, such as a flipchart for work with parents, a small magnetic board for work with children, magnetic story books, aids for non-verbal children, etc. The parents consulted several printing houses on printing costs and analysed the domestic market in order to procure equipment and teaching materials appropriately.  The equipment was purchased for the EI services, and in May the Early Intervention team in Severodonetsk City Council’s Centre for the Comprehensive Rehabilitation of Children with Disabilities received educational and other printed content to support their efforts to inform doctors, teachers and the general public about the EI service.”

Elena Kravchenko, parent leader of the Mariupol NGO “Believe in Yourself”, and Mariupol AUPFEI Representative, describes the challenges they are facing in establishing Early Intervention, and their new initiative, “Inclusive Pryazovia”

“Our efforts to develop two Early Intervention services in Mariupol’ have met a number of challenges. While the city of Mariupol’ was prepared to support these services, they weren’t able to fund the training needed for the two teams of Early Intervention professionals which would provide them. A way to train these teams to deliver early rehabilitation - which has a different approach and philosophy - was found, but we still hope that this can be developed into a genuine Early Intervention approach in time, and are doing what we can to support this. We've also had a setback in that the centre earmarked for a range of services has been closed and major repairs planned.

But our new project, ‘Inclusive Pryazovia’, kindly supported by the Human Rights programme of Open Society Foundations, should be significant for us. Pryazovia is the part of Donetsk Region that has effectively been cut off from support for various reasons, including the military situation. This has meant that many of the issues faced by the city of Mariupol’ and surrounding area have been resolved locally, rather than at regional level. Though not always damaging, this has had a negative impact on funding for services provided to children and young people with disabilities. While in theory schemes are in place (Early rehabilitation services, nurseries and schools, etc.), their implementation often falls far short of expectations.

We will work with the relevant authorities in Mariupol and nearby villages to expand inclusive spaces for children with disabilities and their families, and to develop models for inter-agency cooperation that can ensure quality care, beginning with Early Intervention, and then services that address the needs of older children and their families.

The project will establish communication between parents, Inclusive Education Resource Centres and other state bodies, and develop a guide for community activists; “A Roadmap for Financing Inclusion”. A range of large and small-scale events are planned to reach these goals, but due to the COVID-19 pandemic, it may be necessary to hold mass gatherings like the “Inclusive Pryazovia” forum online. As the timeframe for completing the “Inclusive Pryazovia” project is 22 months, there is sufficient time to adapt such events to circumstances beyond our control.

We would like to thank HealthProm for showing us how to get off to a good start in our efforts to develop new services at community level.”