Milana from Belarus has a severe physical disability that limits her growth and mobility. But it has never limited her creativity. 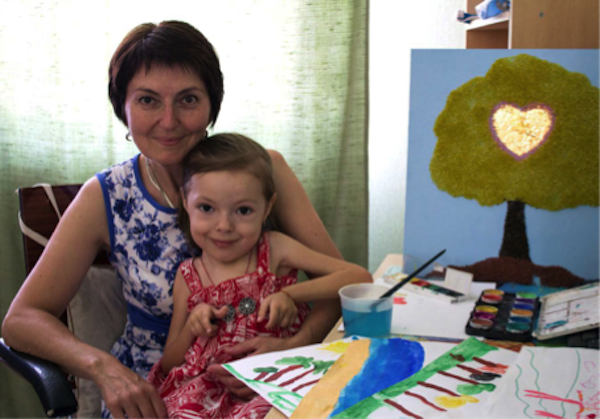 Milana from Gomel, Belarus has a severe physical disability that limits her growth and mobility. But it has never limited her mind or her creativity. She started talking and singing at a very young age, and then began drawing and making collages from different materials. At only six years old, Milana can read and write proficiently.

“We hoped we could send Milana to an art school but I really feared going there. I didn’t think it would be possible for my child to be in a mainstream school. I thought they would ask me, ‘what are you doing here?’. So for my first meeting with the Director of the school I brought Alena, the Regional Coordinator for Gomel, to help me explain my situation and my daughter’s abilities”.

Alena works for HealthProm’s partner organisation, the Belarusian Children’s Hospice, which provides support and advocacy for children with disabilities and their families in several regions of the country.

“The Director of the school wasn’t immediately sure about the situation, and asked a lot of questions about Milana’s health. But she agreed to give it a try and let Milana attend classes at the school”.

From September 2017, Milana started attending one-to-one singing and drawing classes. The school hopes to put her into a mainstream class with other children in the future. The school even mentioned the possibility of developing a class just for children with disabilities in the future, as it acknowledged that there might be other children like Milana living in Gomel who are talented in the arts. Without the vital support provided through our project’s model of community-based advocacy, Milana’s mother may not have been able to advocate for her daughter to attend a mainstream school.