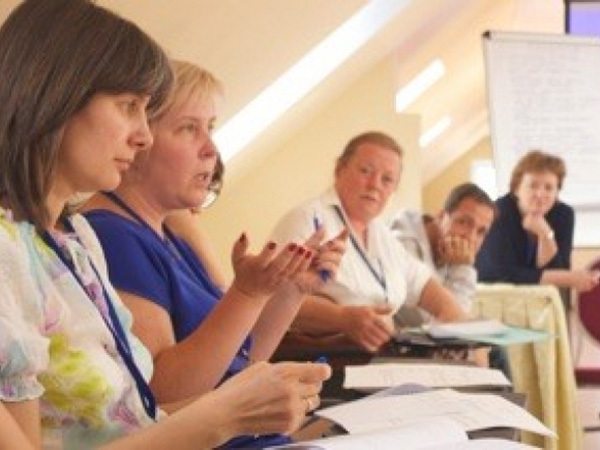 In the UK parents of children with disabilities, working in close partnership with professionals, have played a strategic role in child disability policy since the 1960s. HealthProm supports parent-led civil society organisations in Ukraine to have a similar impact. From 2016-2019, with grants from the EC, UNICEF and UK FCO, HealthProm led an initiative to mobilise parent leaders in ten regions to advocate for vital policy change and the development of services to support families at the earliest stage in their children’s lives. Working closely with our local partners, the Charitable Foundation Early Intervention Institute and the National Assembly of People with Disabilities in Ukraine, we strengthened the capacity of parent organisations to voice their personal experience and the need for evidence-based policy, build strategic partnerships with key allies and regional governments, run advocacy campaigns and build a national platform for change, the All-Ukrainian Parents Forum for Early Intervention.

During this phase of our work, parent organisations in two regions achieved formal commitment to the development of Early Intervention (EI) services, and in all regions parent advocacy for change continues. One of the EI services that has resulted from their efforts, in Vinnitsiya region, is now (in the context of Covid-19) providing online EI support for families, backed by in-service online staff training and mentoring from our partner, the Charitable Foundation Early Intervention Institute. Five early-stage services in Kharkiv region are being similarly supported, and in Luhansk, one of the two regions most affected by the conflict, a new parents’ organisation, formed during this phase, has since persuaded the regional capital authorities to fully fund an Early Intervention service previously delivered part-time by volunteers. The potential transformative impact of parent advocacy has been recognised by the Human Rights programme of Open Society Foundations, which has awarded five two-year grants to parent organisations to continue their efforts to work for an inclusive society in Ukraine.

Get involved See how you join our cause and support our work
Read our stories Read stories of the people whose lives have been transformed
HealthProm is registered in England & Wales under charity number 1100459 at Voluntary Action Islington, 200A Pentonville Road, Kings Cross, London N1 9JP. We use cookies to improve your experience using this website. To learn more, read our privacy policy.
Log in | Powered by White Fuse